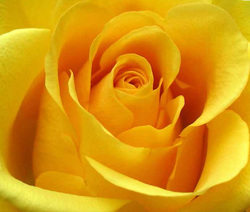 The beauty of a single yellow rose has been a favorite Zonta symbol for nearly 20 years.

The "Zonta Rose" was introduced at the 1984 Sydney Convention, thanks to the dedication and support of District 16 Zontians. In 1983, then Lieutenant Governor of District 16 (New Zealand), Valerie Webster, proposed that a breed of roses be developed as a living symbol of Zonta International. The renowned England-based nursery Harkness Roses worked to cultivate the flower, while Zontian Maureen Ross of Ross Roses in Adelaide, Australia enabled it to be introduced at the Convention.

Today, the lovely yellow bloom can be seen in members' gardens, memorial plantings, schools, hospitals, homes for the elderly, and in the forecourt of Australia's National Parliament in Canberra. Most recently, a Zonta Rose Bed was inaugurated at Bältesspännarparken in Gothenburg, Sweden, as part of the 2002 Zonta International Convention festivities.

But the Zonta Rose is much more than a lovely flower. Since 1999, it has served as the symbol of Zonta Rose Day, which falls on 8 March and coincides with International Women's Day. On this special day, Zontians worldwide are encouraged to publicly distribute yellow roses or items bearing the image of yellow roses, accompanied by information about Zonta International and issues relating to improving the lives of women.

The Zonta Rose itself has bright yellow blooms, produced in large sprays, and neatly spaced to form a bouquet. Each bloom is formed on its own long stem and has a particularly long life, whether on the bush or cut. Its fragrance is light and pleasant, while gardeners will appreciate that it is easy to grow and hardy, reaching an average of 1.2 meters in height.

The Zonta Rose is registered internationally under the name "Hartanna." It also goes by the name "Princess Alice" in Canada and the UK, and "Bright Lites" in the USA.